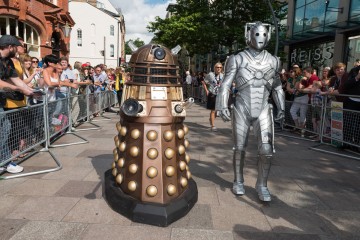 Wales has a varied backdrop, within easy reach of the main UK airports and is an ideal location for film and drama, with many a famous movie made here.

So, if you’d like to imagine yourself on the set of Tomb Raider, Harry Potter, Ironclad or Edge of Love, we can take you there. If it’s Doctor Who that does it for you, there’s the Doctor Who experience in Cardiff Bay or you can travel to another land of fantasy for the cult series, The Prisoner, filmed in North Wales’s wonderful, quixotic, Portmeirion. You can wander in the footsteps of the stars who did location shooting in the Welsh hills and mountains which have doubled up for China, Pakistan and South Africa.

Perhaps you’d like your bespoke tour to take in homes of the stars themselves – locals include Anthony Hopkins, Catherine Zeta Jones, Ioan Gruffydd and Matthew Rhys? You might share Michael Sheen’s passion for Port Talbot or you’d like to see the birthplace of the town’s most famous son, Richard Burton? It’s the stuff of dreams and where some of cinema’s best films have been made. Wales deserves an Oscar for its starring role in many films.