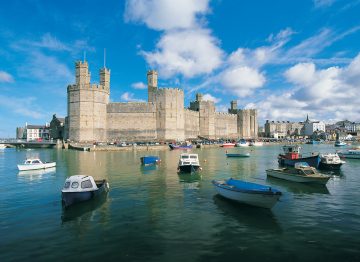 Private sector investment and innovation with Welsh Government support is creating tourism employment opportunities in north Wales, with many companies now recruiting for the season.

The Erskine Arms in Conwy will open to the public this April, following a redevelopment which will see the historic inn transformed to include a restaurant and 10 high quality rooms.  The redevelopment has been supported by the Welsh Government’s Tourism Investment Support Scheme with £140,000 and will create 23 jobs.

Economy Secretary, Ken Skates, said, “Being right in the centre of Conwy the Erskine arms is going to be a welcome addition to the town and it is fantastic to see a historic inn being given a new lease of life and transformed to become a very high quality product providing employment for the area.  Tourism is a significant industry in Wales employing nearly 10% of the workforce.”

The redevelopment is nearing completion and the team are looking at hiring staff over the coming weeks in readiness to open ahead of the Easter holidays.

Zoe McLennan, Marketing Manager, said: “We have secured a number of our senior roles within the team including our general manager and our head chef who are both from the local area. We are still looking for other team members to fill a variety of positions and encourage anyone looking for a new and rewarding challenge to get in touch.”

The Erskine is owned by Stange & Co. Ltd who also own the Glengower in Aberystwyth and The Snowdon in Llandudno. Stange & Co. Ltd. is a family owned group of character pubs and inns independently run and focus on homemade hearty food on their menu along with local cask ales at the bar.

Another business looking to recruit further staff due to a successful first 6 months is the Sea Shanty Cafe in Trearddur Bay, Anglesey.

Due to the popularity and expected increasing demand over Easter and Summer the team are now looking for additional staff.

Owner, Phil Brown, said, “The government contribution was enormously helpful because it allowed us to put the cherry on the cake and make Sea Shanty totally unique.

Since 2006 the number employed in tourism has increased by 33,600, the second largest absolute growth in employment out of all of the priority sectors and growth over this period is 34 per cent.Employment in tourism grew by 8,700 in 2015, the largest increase alongside financial and professional services, and in Wales it’s grown at a faster rate than tourism in the UK as a whole since 2006.

“We have even had day visitors from Cheshire just to view our eccentric premises and of course they stay for lunch. Our nine chefs will not be sufficient to handle the amount of customers we now know will be on our doorstep when the season begins at Easter. Including part time staff we employ 50 people now and require 65 from Easter onwards”.

The new Fforest Coaster, which received TISS funding, will be opening this Spring, and the team are now looking for extra staff, with details available here: https://www.zipworld.co.uk/about-us/jobs

The Grade II listed Washington Hotel in Llandudno, is currently being transformed with support of Tourism Investment Support funding of £190,000 into the new home for Dylan’s Restaurant.

This will be the third site for company and the £1.5m project will create up to 40 new jobs, bringing the total number of staff across Dylan’s three restaurant sites and their Llangefni based prep kitchen and head office to 180.