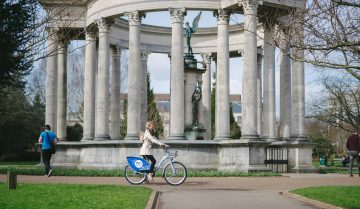 Cardiff is rapidly becoming the ideal place to tour on two wheels.

Nextbike – the world’s most extensive bike-share operator – is celebrating more than 15,000 journeys in Cardiff in the first three months of launching the scheme in the Welsh capital.

A whopping 15,443 rentals have been clocked up on the bikes in Cardiff and 7,847 Cardiffians have signed up for the scheme since it was launched into the city in late March. And across the early May Bank Holiday, the scheme was nextbike’s best-performing in the country.

What’s more, the people of Cardiff have now cycled a staggering 28,700km since the scheme was introduced to the city – almost three quarters of the way around the globe.

The incredible figures come after 20 stations were added to the scheme in May and plans for an extra 20 stations to be installed in late summer are being finalised.

Cardiff now boasts 250 and 25 stations across the city.

Overall nextbike rental figures for May were record-breaking across all of its UK schemes, with a total of 48,225 journeys made.